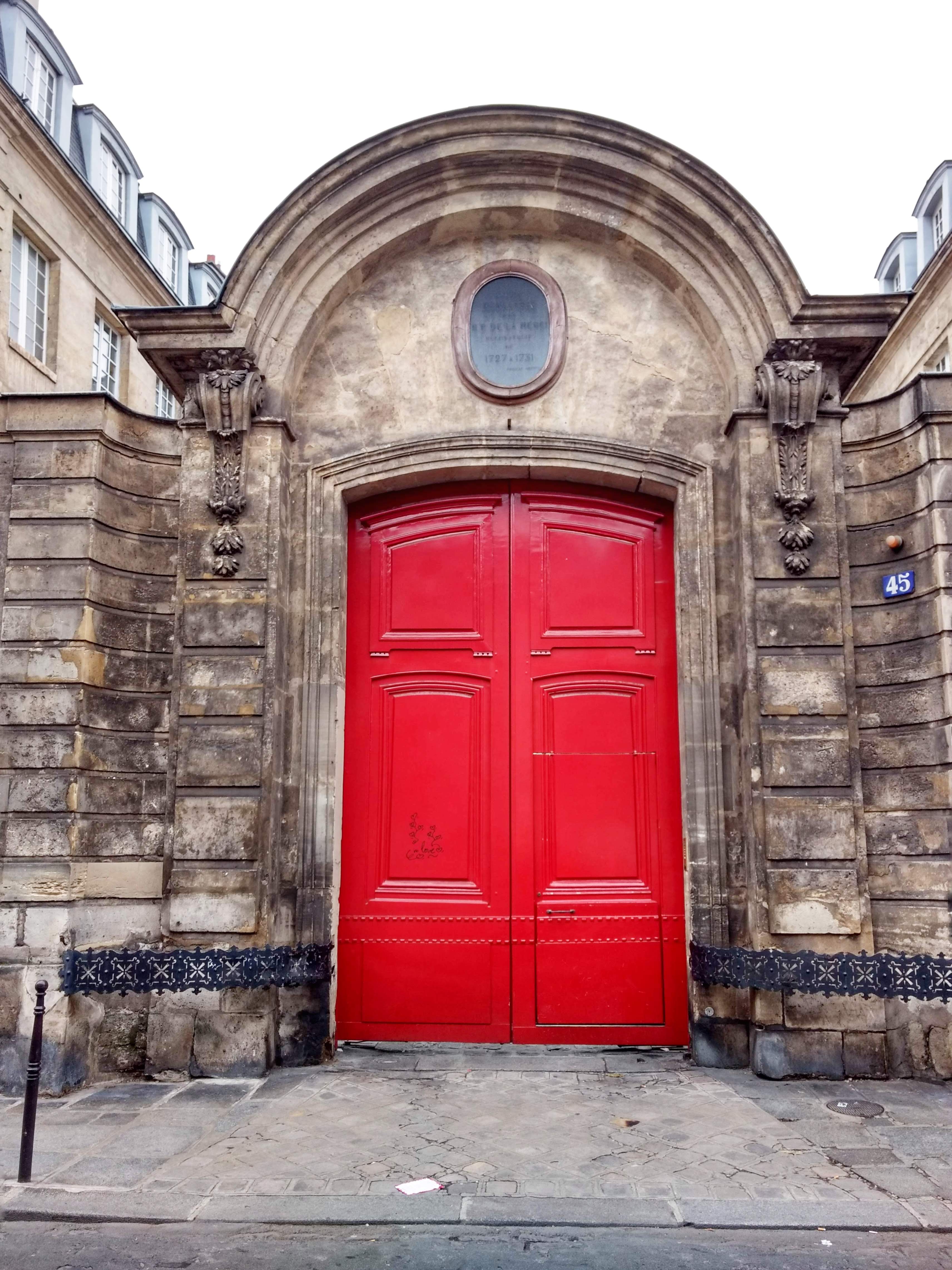 Unbeknownst to me, I was following in the footsteps of Eugene Atget yet again when this lovely red door at 45 rue des Archives caught my eye. I love the deep, yet vibrant, red-lacquered door contrasted with the weathered stone archway and the worn cobblestones. Where does this door lead? Who has walked by and through it over the years? I decided to learn more and discovered a rich and varied history that led me to current events in Paris. 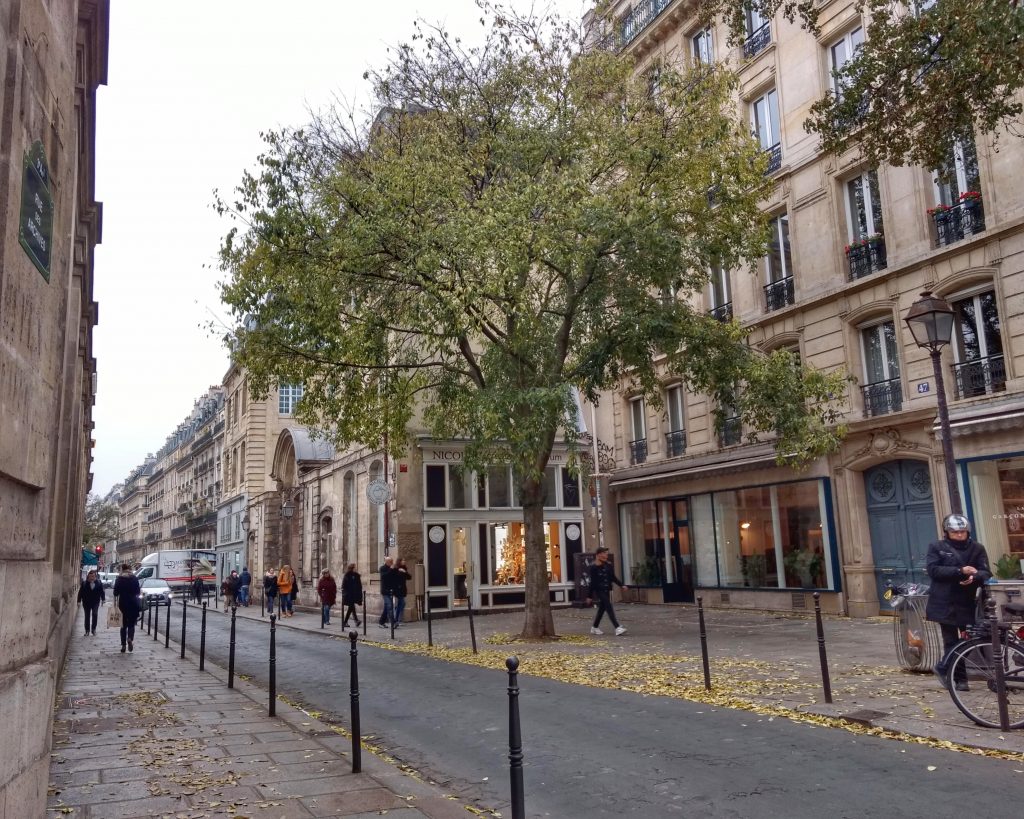 In the 13th century, the area now known as the le Haut Marais, or Upper Marais, was settled by the Knights Templar. Over the centuries, several structures have stood on the site of 45 rue des Archives, located just south of the National Archives. The original building housed a religious order that paid ransoms for pilgrims in the Holy Land during the Crusades. In 1613, the Fathers of Mercy were given permission by Marie de Medici to occupy the building. It was rebuilt between 1727-1731 by Pierre François Godot, or Godeau, who also rebuilt a convent for the same order in Lyon. During the French revolution, it was used as a prison, and in 1798 it became the Theater of the Nation. In the 19th century, it transitioned to apartments and offices.

The Musée Carnavelet, the museum of the city of Paris, has two versions of Eugene Atget’s photograph of 45 rue des Archives available for viewing in its digital archives; one black and white, the other sepia-toned. More apparent in the sepia-toned work is a wavy streak, the ghostly image of someone passing by without stopping during the long exposure. The Musée also has a photograph taken by Charles Joseph Antoine Lansiaux in 1916 of the same location, the image on the left. It shows the port-cochère, or carriage doors, open to reveal another set of doors.

In the images by Atget and Lansiaux, there is a sign next to the door for an A. Cohn. I found him listed at 45 rue des Archives in a 1904 Bulletin union Francaise pour le sauvetage de l’enfance, or French Union for the Rescue of Childhood. The organization was founded in 1887 to help neglected and abused children. Cohn’s entry lists him as a full member and trésorier payeur généneral à Mézières (Ardennes), which I gather made him the senior accountant for an area in northeastern France. During the latter part of the nineteenth century, many rural families migrated to cities, only to work long hours in factories. Out of necessity, the children were forced to work alongside their parents or were left unattended, and the organization stepped in when necessary. Considering the work done by Cohn and his associates to help these children, it is tragically ironic that less than thirty years later thousands of Jewish children were deported, many from the Marais, and died on their way to, or were killed in, concentration camps during WWII.

Now the Musée d’art et d’histoire du Judaïsme is around the corner, with the Jardin Anne-Frank tucked inside the block. We spent a lovely, rainy afternoon in November exploring the Musée d’art et d’histoire du Judaïsme. Its focus is different from the Mémorial de la Shoah, rather than the Holocaust, it explores Jewish history through its displays of art, books, religious objects, and clothing from all over the world. These beautifully crafted objects created throughout the ages offer a sense of history and perseverance and illustrate the many different cultures that the Jewish people have been part of throughout the diaspora. The image below, in the Musée Carnavalet collection, by Charles Lansiaux shows the building as it was in 1916. The stone appears much darker, no doubt from centuries of soot.

Sadly, historical themes often repeat throughout time. For over a decade, France has been grappling with its treatment of immigrants and refugees, who are largely Muslim and relegated to the suburbs. Additionally, the country’s Interior Ministry recently announced there has been a 74% increase in anti-semitic incidents over the past year. Earlier this week, historical graves were vandalized in an old Jewish cemetery in Quatzenheim, in northeastern France. It reminded me of the display of medieval gravestones at the Musée d’art et d’histoire du Judaïsme, their beautiful carvings, some cracked and crumbling with age, now venerated and protected against desecration. 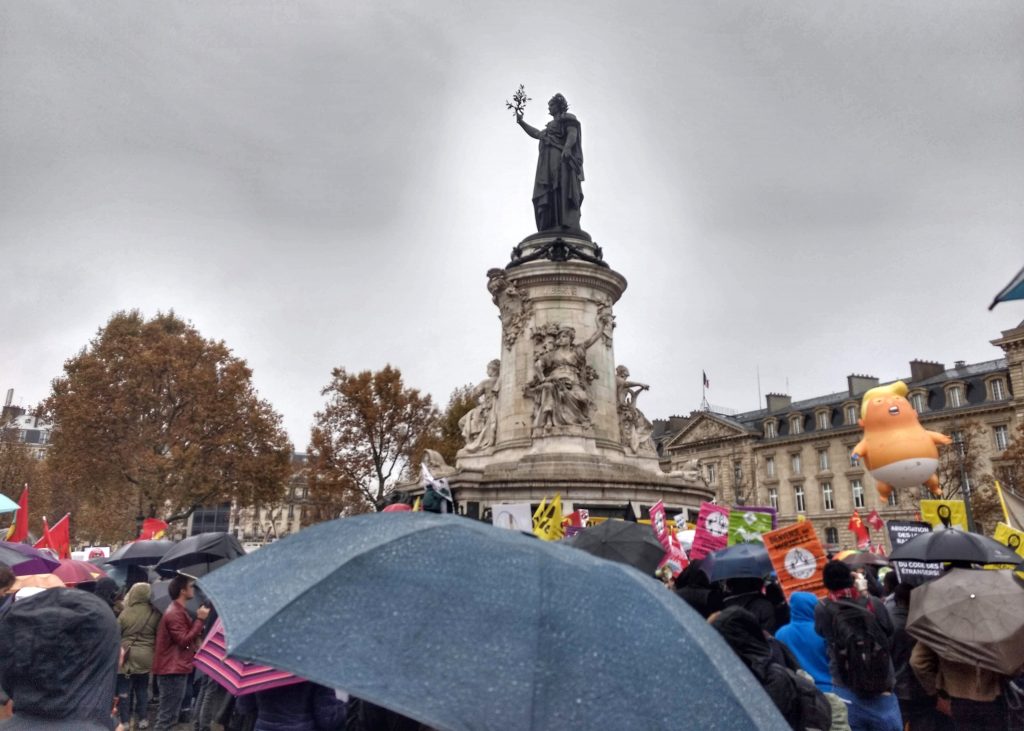 In Place de la République, just a fifteen-minute walk north of 45 rue des Archives, there have been very visible protests which offer hope. On Armistice Day 2018, we attended a demonstration in support of immigrant’s rights, an issue that is deeply personal to us. It was invigorating to be surrounded by people from so many countries and social backgrounds united to demand respect and humane treatment for all people, both in France and the U.S.A. In response to the mounting anti-semitic events, this past Tuesday 20,000 people gathered in Place de la République, and in many other communities across France, to protest.

In all ancient cities, history and the present weave through one another. Delve a little deeper into a door and a neighborhood opens up, and suddenly connections to the present become apparent. As I wrote in my previous post The Marais: An unexpected meeting, Paris isn’t just a tourist attraction, it’s a modern city with complex, deep-rooted social problems. One of the reasons I love revisiting a place is that I get to know it more deeply over time, noticing the things that remain the same and the ways in which it evolves.

Musée Carnavelet
16 Rue des Francs Bourgeois
75003 Paris
Note: The museum is closed for renovations until late 2019. Check their website later in the year for a precise opening date.