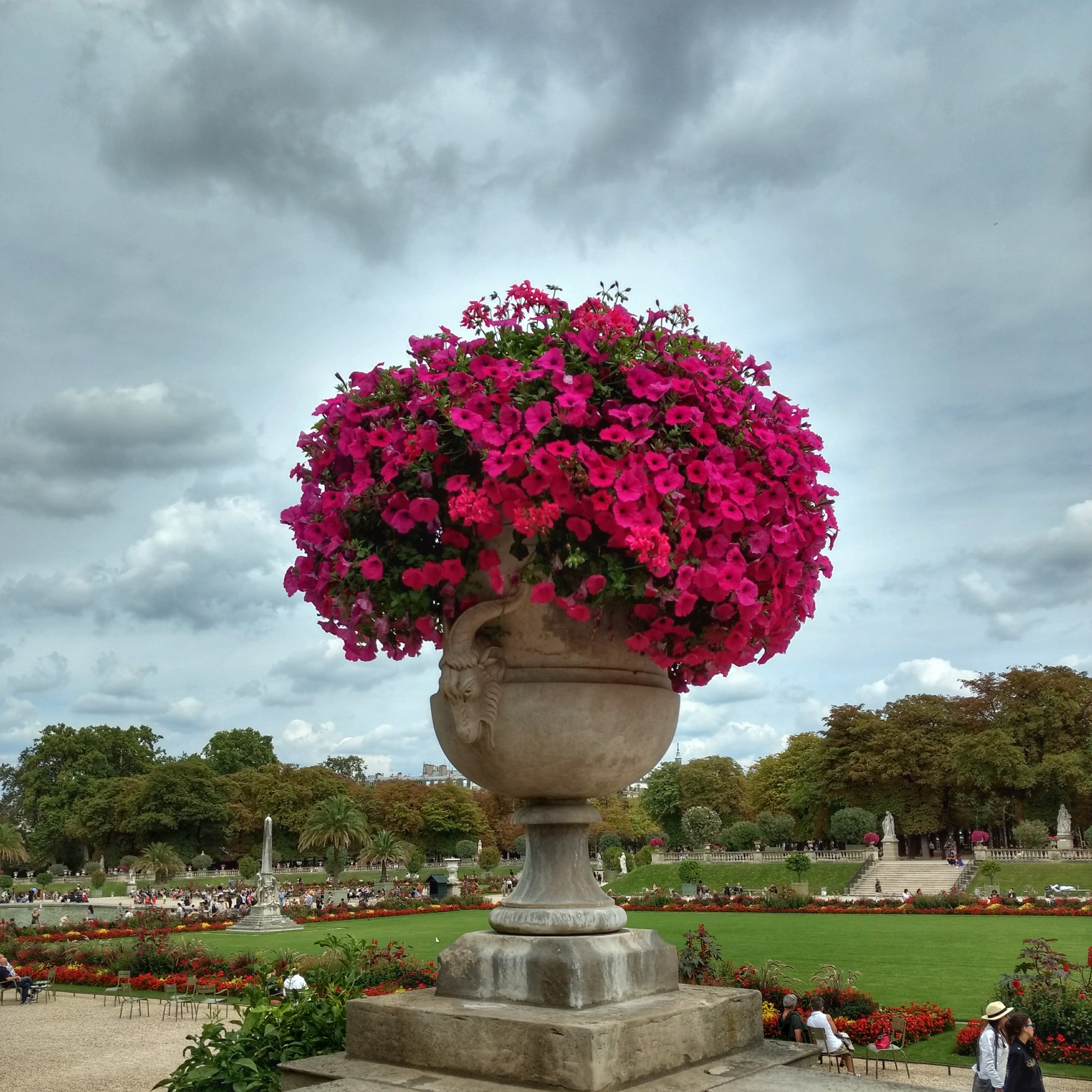 On the cusp between summer and fall, the Jardin du Luxembourg teemed with life enjoying the last days of mild weather, though dark clouds threatened impromptu showers. On the far side of the pond we settled into a couple chairs to watch the scenes of an idyllic Parisian Sunday afternoon play out before us. Students and young adults unencumbered by children lounged in the distance, soaking up the sun, laughing, and having picnics on the one lawn on which they allow people to tread. Couples of all ages and small groups of friends strolled slowly, heads bent in conversation. 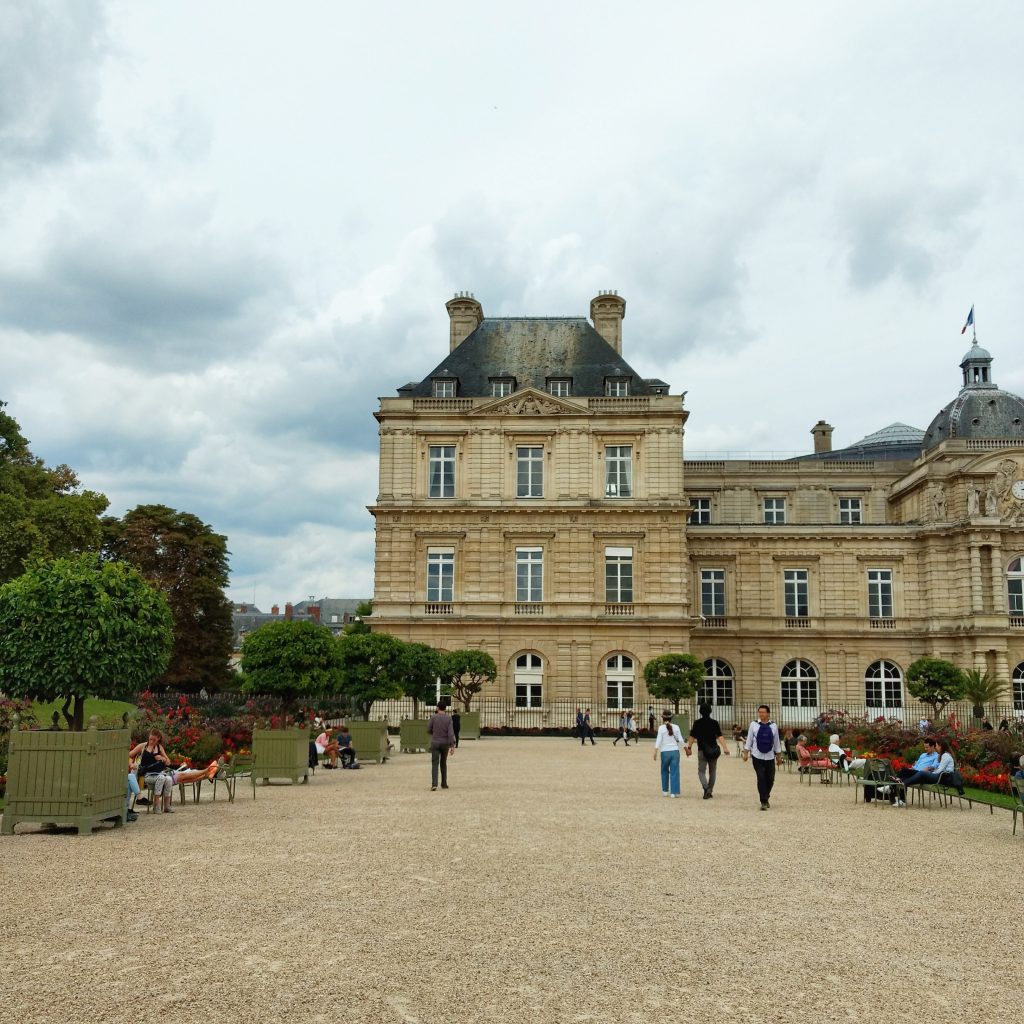 Families congregated around the water where children have enjoyed sailing miniature boats since 1927. We became engrossed with them and their boating dramas, the dynamics so different from those in the U.S. Children ran in little packs ahead of their parents, and we tried to guess to whom they belonged. They had their own way of deciding who got to use the big stick to pull in a boat. Toddler’s hands weren’t held tight next to the pond, and only one almost toppled in. Parents engaged and played with the children, but they didn’t hover and fuss. 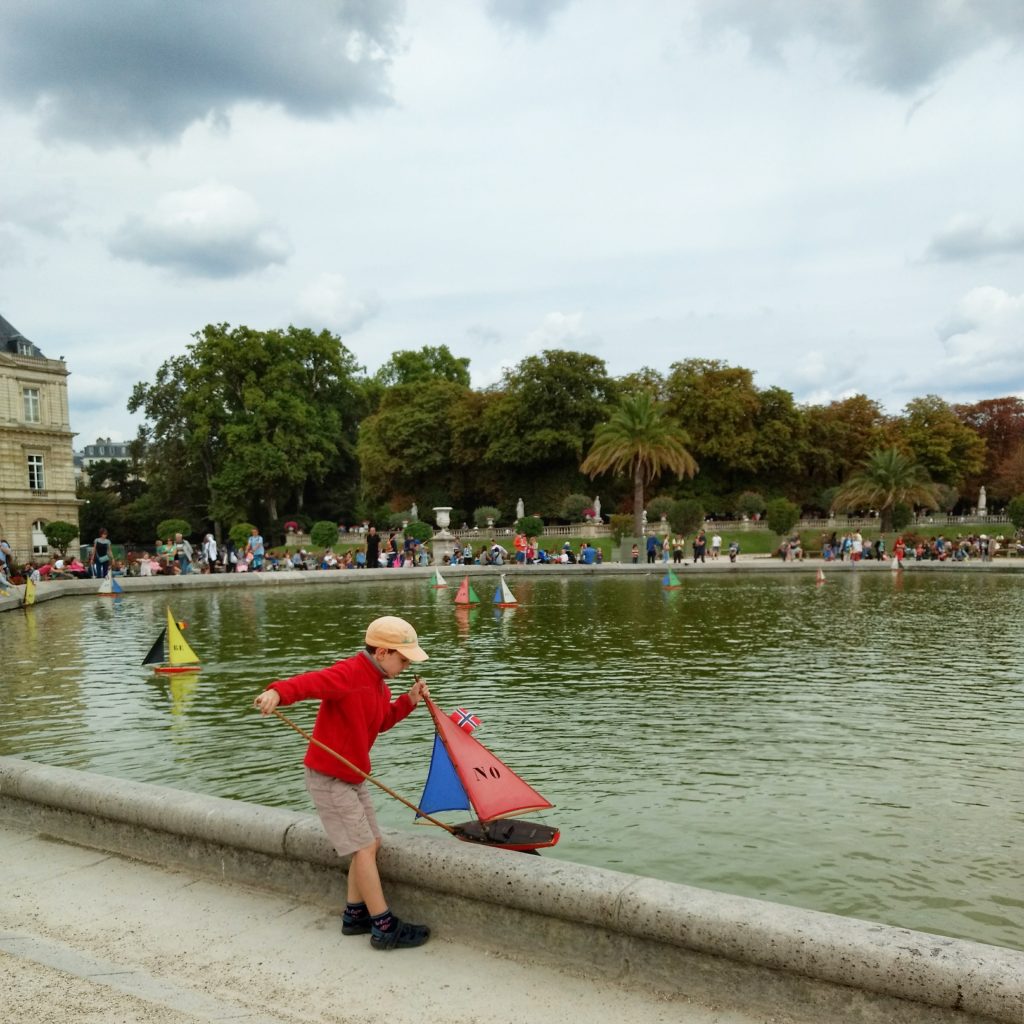 A little boy in red galoshes, his blond hair wild, round tummy protruding through a striped shirt, marched by with his long stick held with reverence, as though it were a spear. I realized that the children were allowed to be themselves, not dressed as stereotypes of their gender in loud, neon colors. Nor were they walking advertisements for cartoon characters or toys. 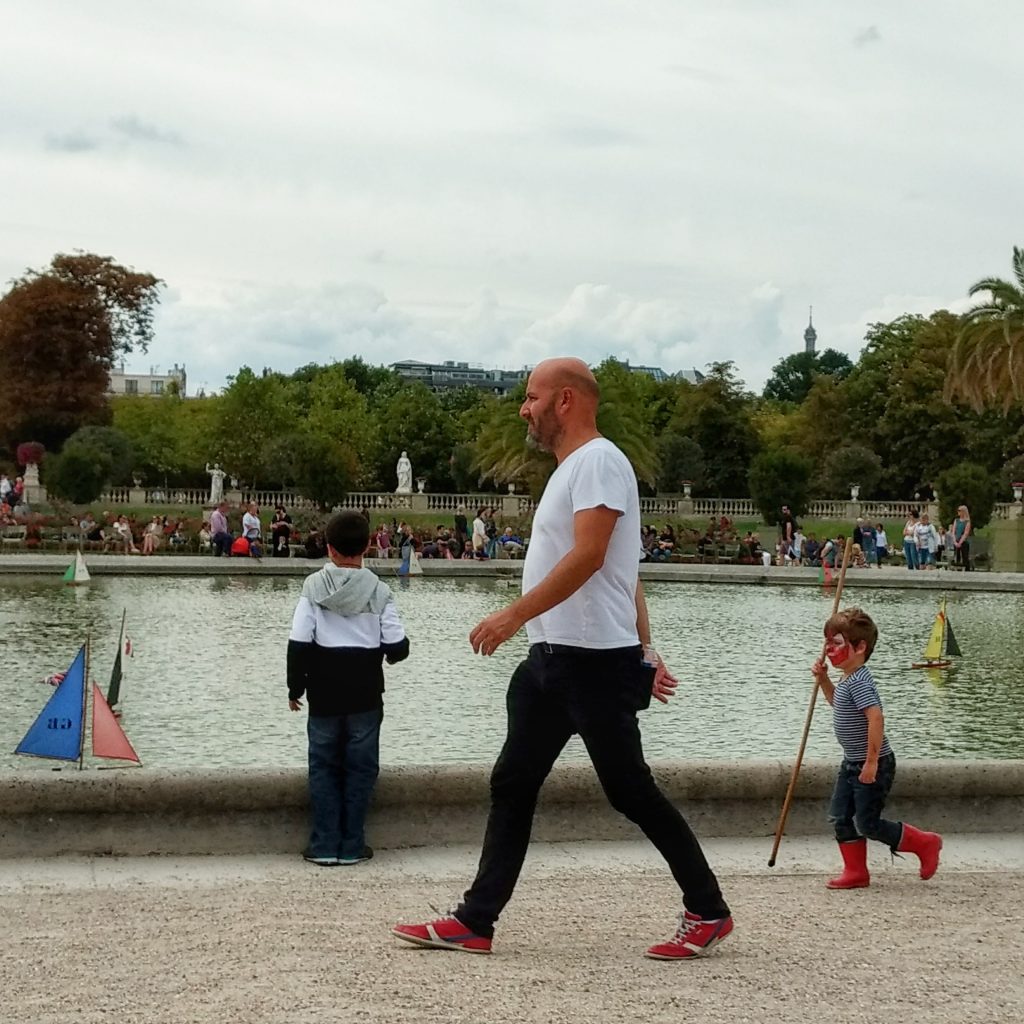 Two little girls in muted colored smock-style dresses looking like they were from another era, held hands, and skirted the pond, engrossed in their own play. It reminded me so much of playing with my best friend Brooke as a child, each of us in our Little House on the Prairie dresses, creating entire worlds together. How sweet to see that such experiences are still shared by children. 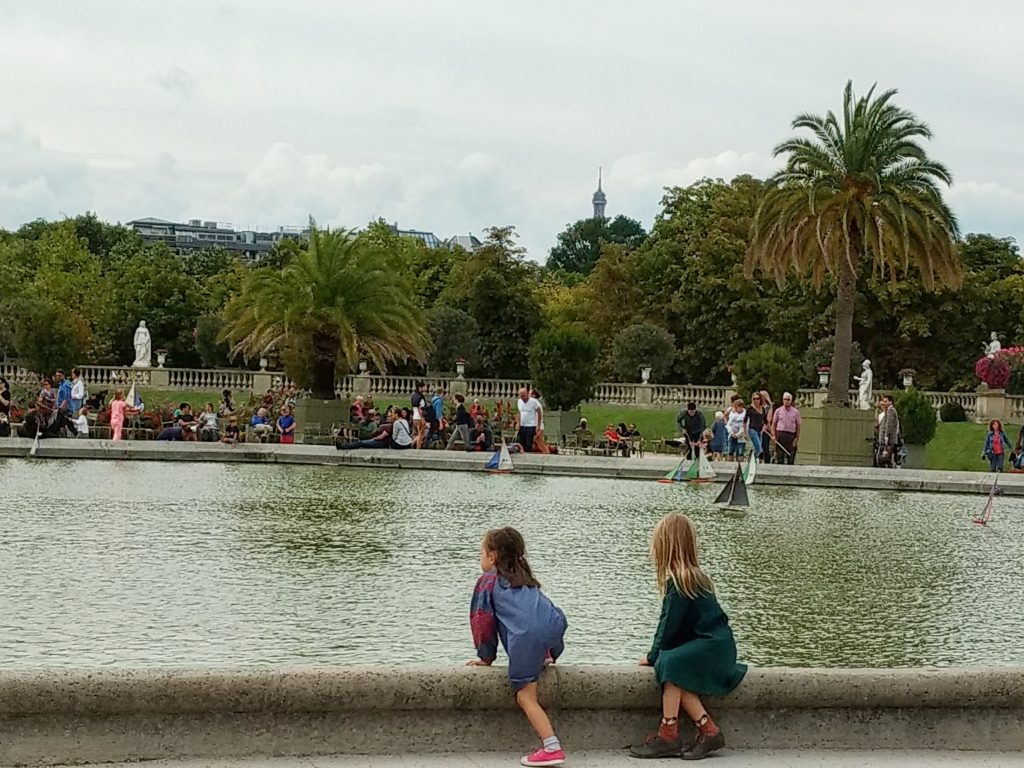 Big gray clouds set a beautiful backdrop against the bright green leaves, colorful flowers, and light-colored stone, turning the water a deep, forest green. In the distance, 1940s music beckoned. Following the sounds we found the gazebo bandstand under an umbrella of trees, a full big band orchestra and a woman singing old American standards with a charming French lilt. Hundreds of people were gathered, many sitting on the little green chairs, others milling about. Many people sang or bopped in time to the music. Four late middle-aged couples swing danced, their bodies loose and bouncy, with a pinch of cockiness, or self-assured bliss. The women wore neutral colored clothing and pants; they weren’t dolled up in 1940s costumes or hair and makeup. The men’s faces were quintessential Frenchman from old movies: stubble, some pouches under the eyes, with an air they knew the hard knocks of life, faces with character. Younger people watched them with smiles, some took video. Children all around danced and toddlers bounced and smiled. The elderly in their chairs, some in couples, others single with their adult children, had faraway looks in their eyes. At the beginning of a new song their faces lit up with recognition, perhaps a slight smile. 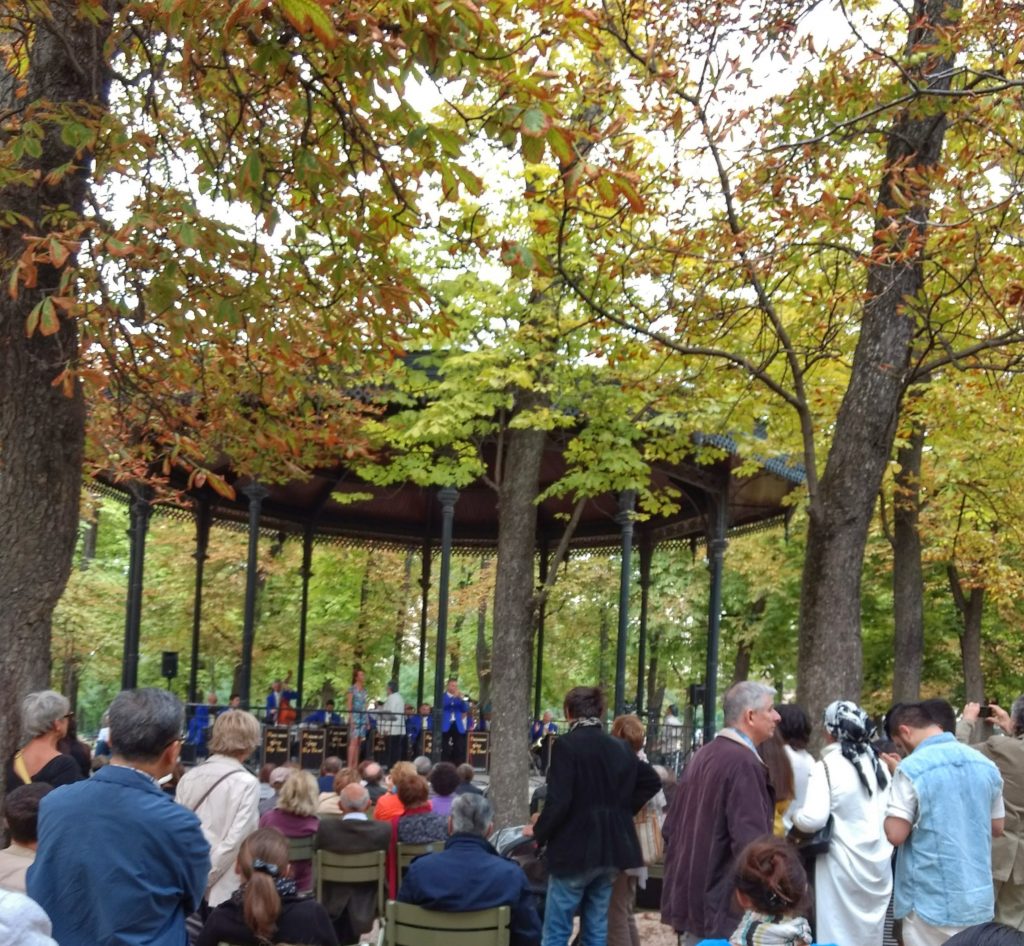 We spotted two free chairs to the far right and darted over. There was so much to take in, and we enjoyed watching the crowd here as much as by the pond. A sweet family of four with a grandmother in tow sat in front of us. The mother and the little boy of around six ventured up to the edge of the gazebo. He stood on its platform, hands  holding on to the rails, bouncing. When he turned to her they began to dance with abandon. From his elevated perch she would dip under his arm and spin around. He looked very proud to dance with her, and she so free and happy, adding in a bounce and little kicks, a big smile on her face. A stylishly dressed late middle-aged African-American man in a fedora with a debonair silk scarf hanging around his neck stood under the trees nearby talking with his wife. When the band began a Ray Charles song, his face lit up, and he grooving by himself in that too slow way older people often move to music, a self-satisfied grin on his face.

As we sat there, watching all these people enjoying the music so freely, I had the overwhelming urge to dance with Octavio under the trees. When Louis Armstrong’s Ain’t Misbehavin’ started up, he took me in his arms. As he held me tight, I opened my eyes to see the leaves above, their dappled light, the scent of his neck, us spinning. I felt like Cinderella at the ball, like a fairy tale, and I was so proud and happy to be with my husband. In the middle of the song we noticed an elderly couple looking for seats, grabbing our blazers and my purse, we offered our chairs in pantomime. They protested, but we insisted. In the middle of shrugging on my blazer Octavio swept me back up in his arms, my purse trailing behind, dangling from my hand. I nuzzled my face into his neck and then smiled up at the trees, imprinting the moment. I knew in the years to come, when we experienced difficulties in life, my mind would return here; walking the Jardin du Luxembourg’s paths hand in hand with my beloved, watching  a slice of Parisian life, and dancing in the magical garden.

You will need to scroll down this page for a schedule of concerts in the Jardin du Luxembourg.

Music in the Park lists a variety of concerts that take place around the city. On this page, scroll down to the events section.

About the Jardin du Luxembourg

The Jardin du Luxembourg is a beautiful 60 acre park in the sixth arrondissement, boarding the fifth. Built in the early 17th century by Marie de Medici, the gardens have been open to the public since later that same century. The Luxembourg Palace, situated along the northern border, is where the French senate convenes. To the west, art exhibitions are held in the Musée du Luxembourg. On Sundays especially, the Jardin du Luxembourg is filled with locals enjoying a day in nature, as city life does not afford most Parisians green space at home. The park is generally open from sun up to sun down; you will find practical information for planning your visit here, but I recommend keeping your itinerary loose and enjoying the day.