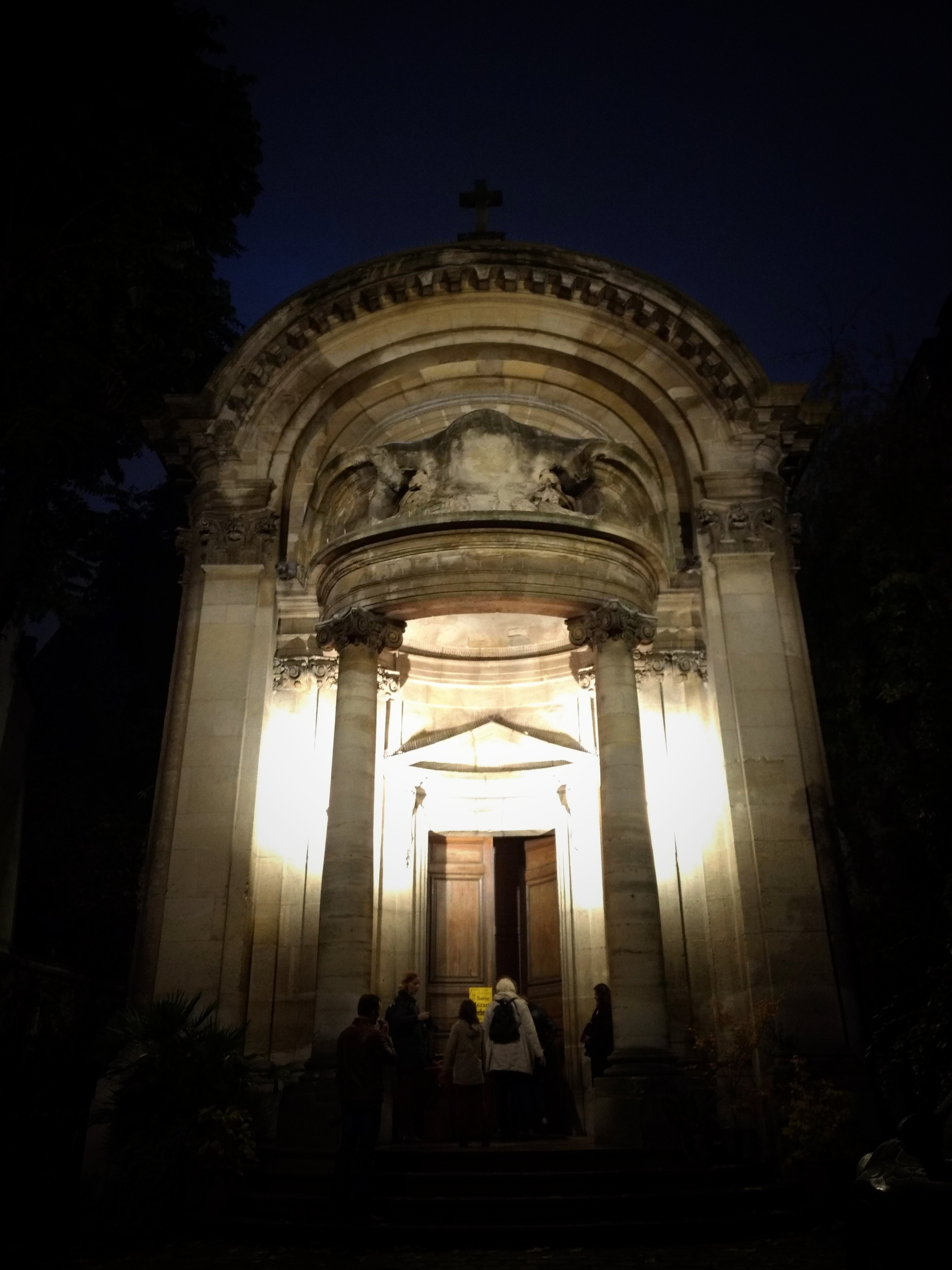 On our second night in Paris, the piano concert program at Église Saint-Éphrem-le-Syriaque in the Latin Quarter included Satie, Chopin, and Beethoven. Almost exactly four years ago to the day, we’d attended our first classical concert in a Parisian church there of all six of Bach’s Cello Concertos; one of our most treasured memories. Filled with anticipation, we retraced our steps down Boulevard Saint-Germain and up the hill. Turning onto rue des Carmes, the brightly lit dome of the Pantheon beckoned. We easily found the church gate and walked into a cobblestoned courtyard. Set back from the street, the illuminated round portico flanked by white columns glowed like a little jewel. 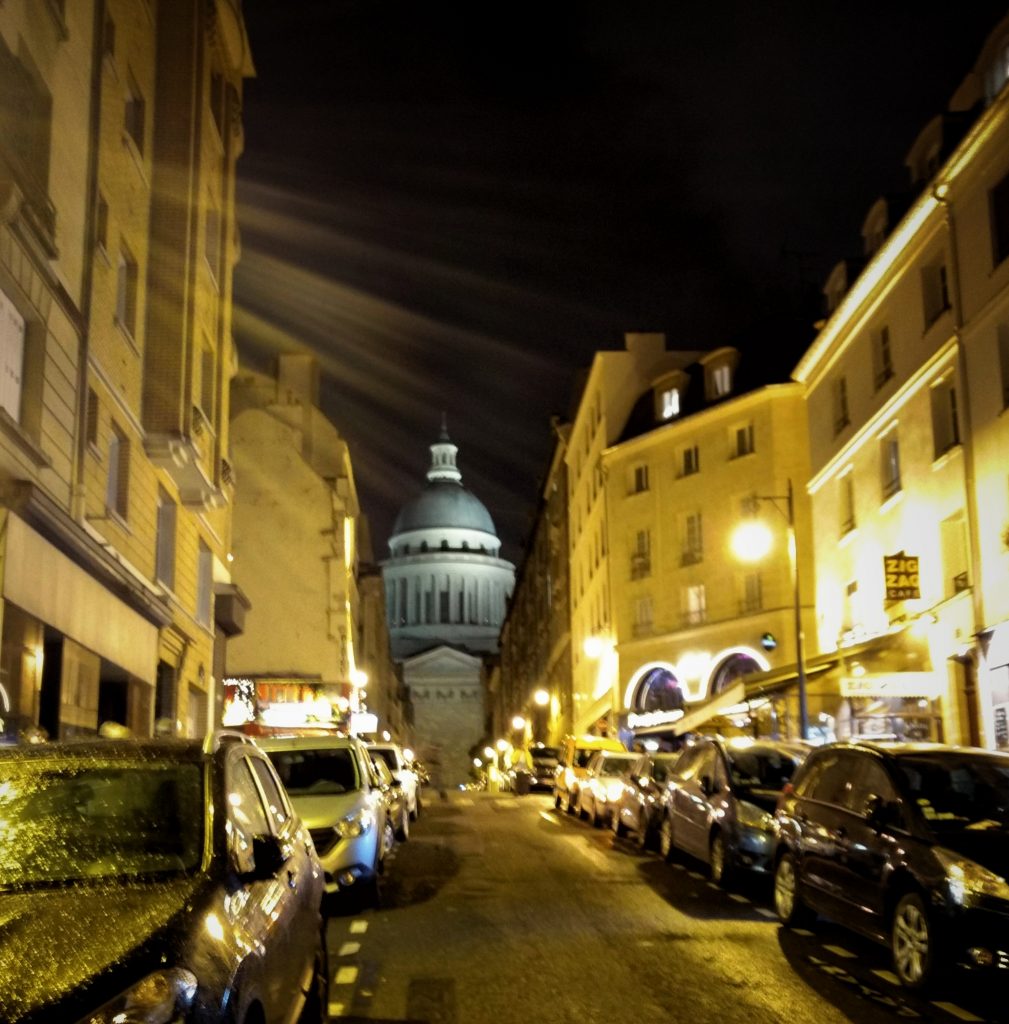 Built in the 18th-century on the foundations of much older churches and dedicated to Saint Ephrem of Syria, the Syrian Catholic church of Paris has a very different feel from most Parisian churches. The altar is hidden away by an ornate wooden screen with arched openings covered by sheer white curtains, creating an air of mystery. The church is small, almost a chapel, seating only about 75 people. This creates a sense of intimacy, as though the audience is sharing a secret.

I first heard Satie’s Gymnopédie No. 1 in one of Woody Allen’s lesser-known movies, Another Woman, in the late 1980s. The contemplative notes accompany the main character, Marion, throughout the film. Unlike anything I’d heard before, it captured my young heart and became a theme for my innermost thoughts during moments of stillness. This was back in the days of VHS tapes and video stores. When I longed for the music or felt the melody slipping from memory, I would rent the movie just to hear it. At some point, by pausing and rewinding, I copied down the Satie’s name and the song title. Much later, I got a tape or a c.d. and played it over and over, memorizing each note, not knowing that much later my path would cross twice with Satie in Paris. 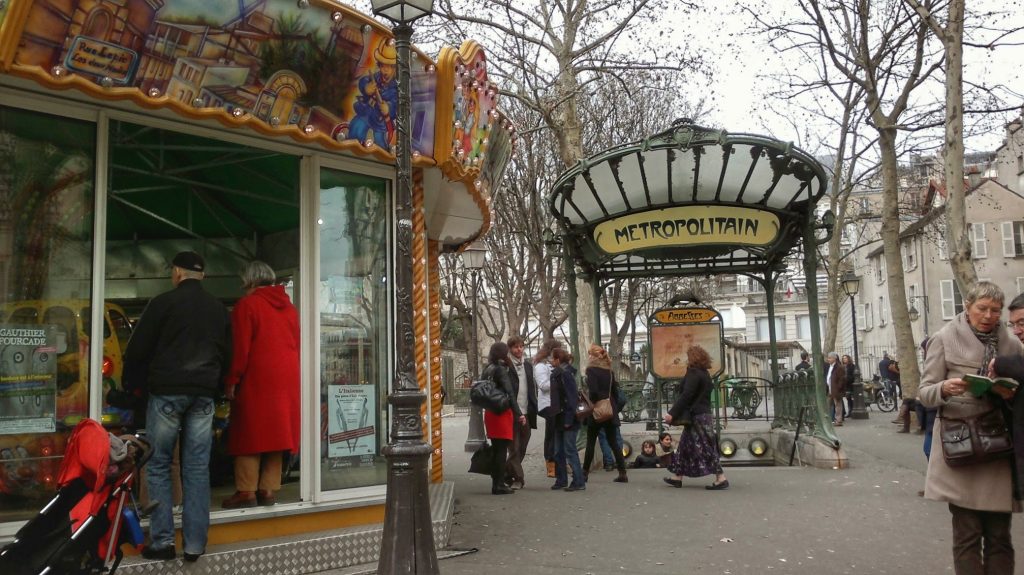 Some fifteen years later, navigating the warren of Paris metro tunnels on my way to Montmartre, I heard the familiar notes above the crowd, as if calling me by name. Turning a corner, I found a young man sitting on the floor plucking out the slow notes on his guitar strings. Tears stung my eyes, for the beauty amidst the chaos, and at this chance meeting of my old friend Satie in Paris. I dropped some coins into the musician’s case and slipped back into the crowd. The tune accompanied me on my exploration of Montmartre as I climbed its rainy, hilly streets alone, lending a romantic air. Years later I learned Satie had once lived in the quarter, had wandered these same streets, his head likely full of music. 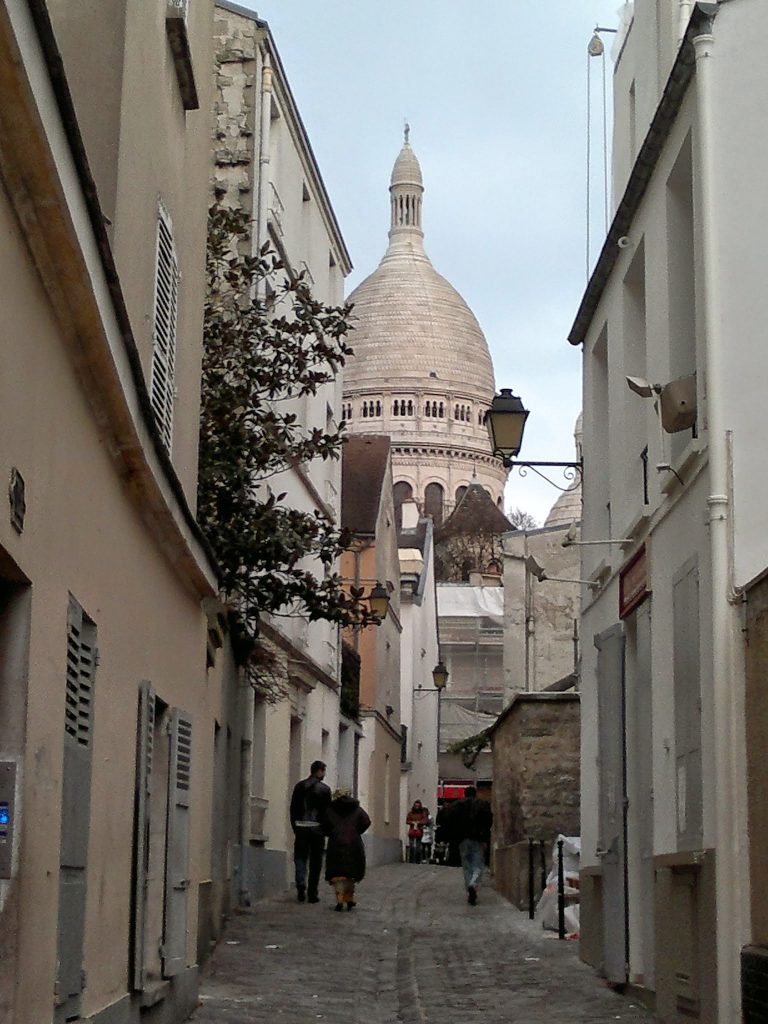 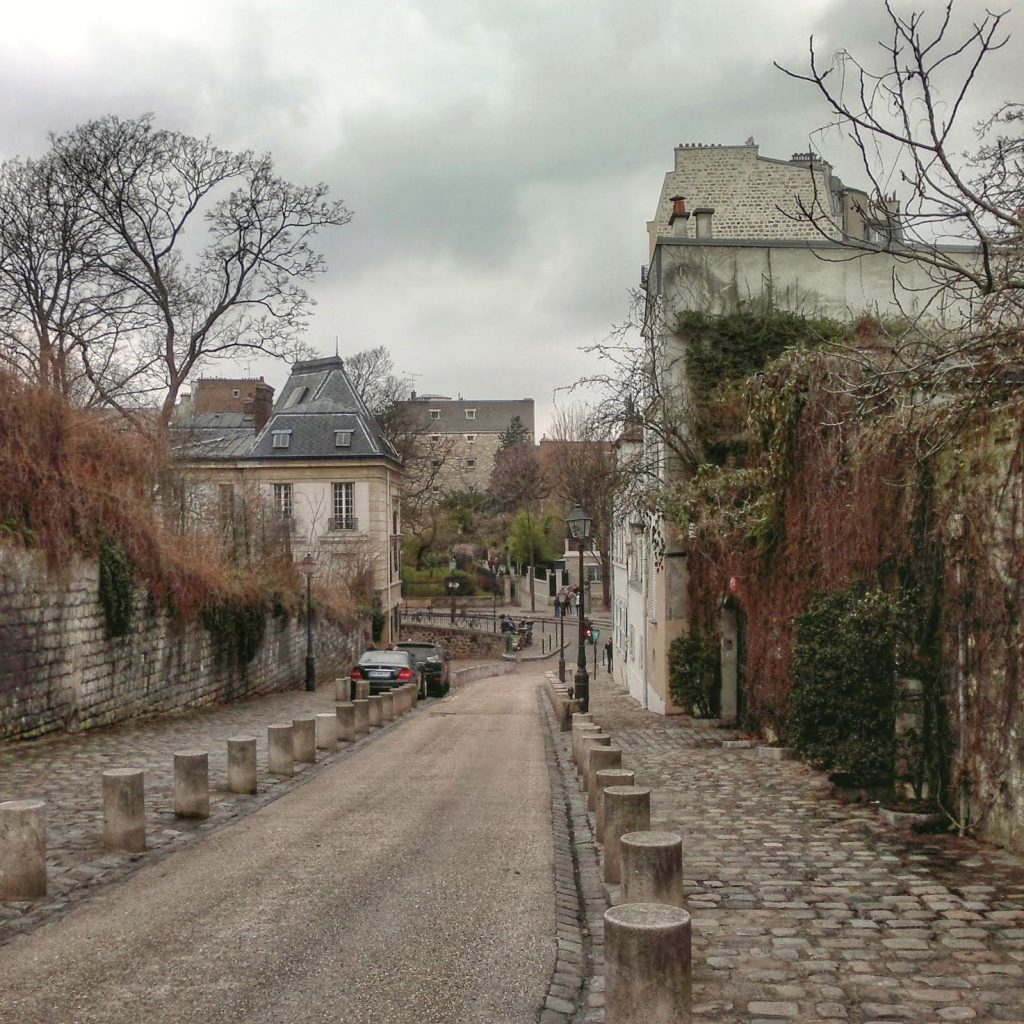 Twelve years later, my husband and I held hands and watched a woman light candles in several candelabras before turning out the electric lights. The interior of the church glowed a warm yellow, as it had for most of its existence. The pianist slipped out from between the gauze curtains and took his place at the piano. I held my breath. After a few moments of stillness, he played the first chords, and with them my first tears. The slow notes seemed to leave the piano almost reluctantly, seeping out and enveloping us like a fog. I don’t know whether he played the first piece more slowly than normal or whether time was suspended for me alone. In the long spaces in between, I felt both an anticipation of the next note and wanting it to go slowly and last for hours. I was simultaneously in a candlelit church holding my husband’s hand, in my mid-30s wandering Paris feeling both happy to be alone that day and yet deeply lonely in my life, and also a teen watching a too-mature movie, dreaming of what life would hold. Shared with my beloved, this was by far the most beautiful moment; though it would not have felt so special without having lived the other experiences, or having lived with the music as an inner soundtrack for decades. 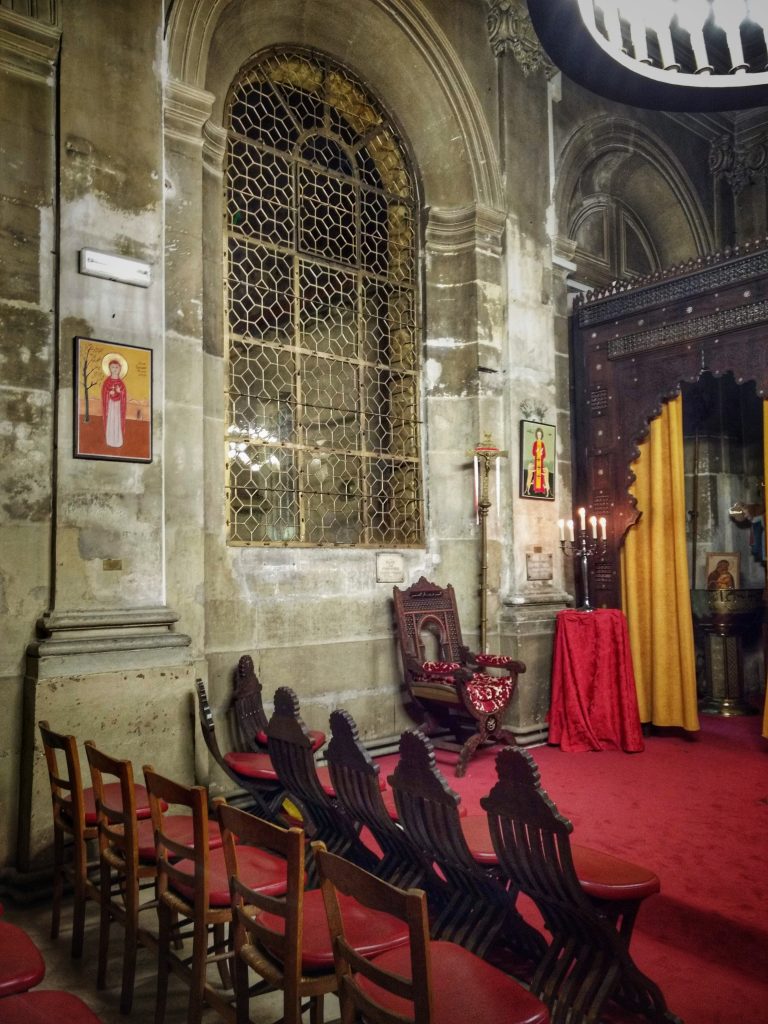 The other day I re-watched Another Woman, it had been years, perhaps even a decade. I read that of all the characters in his films, Allen most identified with the character of Marion, a construct for him to work through his feelings about turning 50. With a greater breadth of life behind me, I understood the character and themes more fully: the ephemeral nature of life, the ways we misperceive ourselves, misunderstood intentions, and the way time can seem flexible, folding backward and forward on itself. This time Satie’s Gymnopédie No. 1 reminded me of a happy evening in Paris. Unlike Allen and Marion, I felt at peace.

You may also enjoy my blog post about Vivaldi’s Four Seasons at Saint Paul-Saint Louis in Paris.

Tickets typically cost €22-30 You can book online or try your luck and pay cash at the door. We chose to book online while in Paris. In 2017 we were able to give our name at the front table and collect our tickets. However, in 2018 we had to print them first at the hotel for one concert, and for another chose to pick them up at a store like a Best Buy. I’m sorry I didn’t note which sites we used, just be aware you may need to do these things. Also, the purchasing instructions said we had to present passports at the door with our tickets but no one ever asked for them.