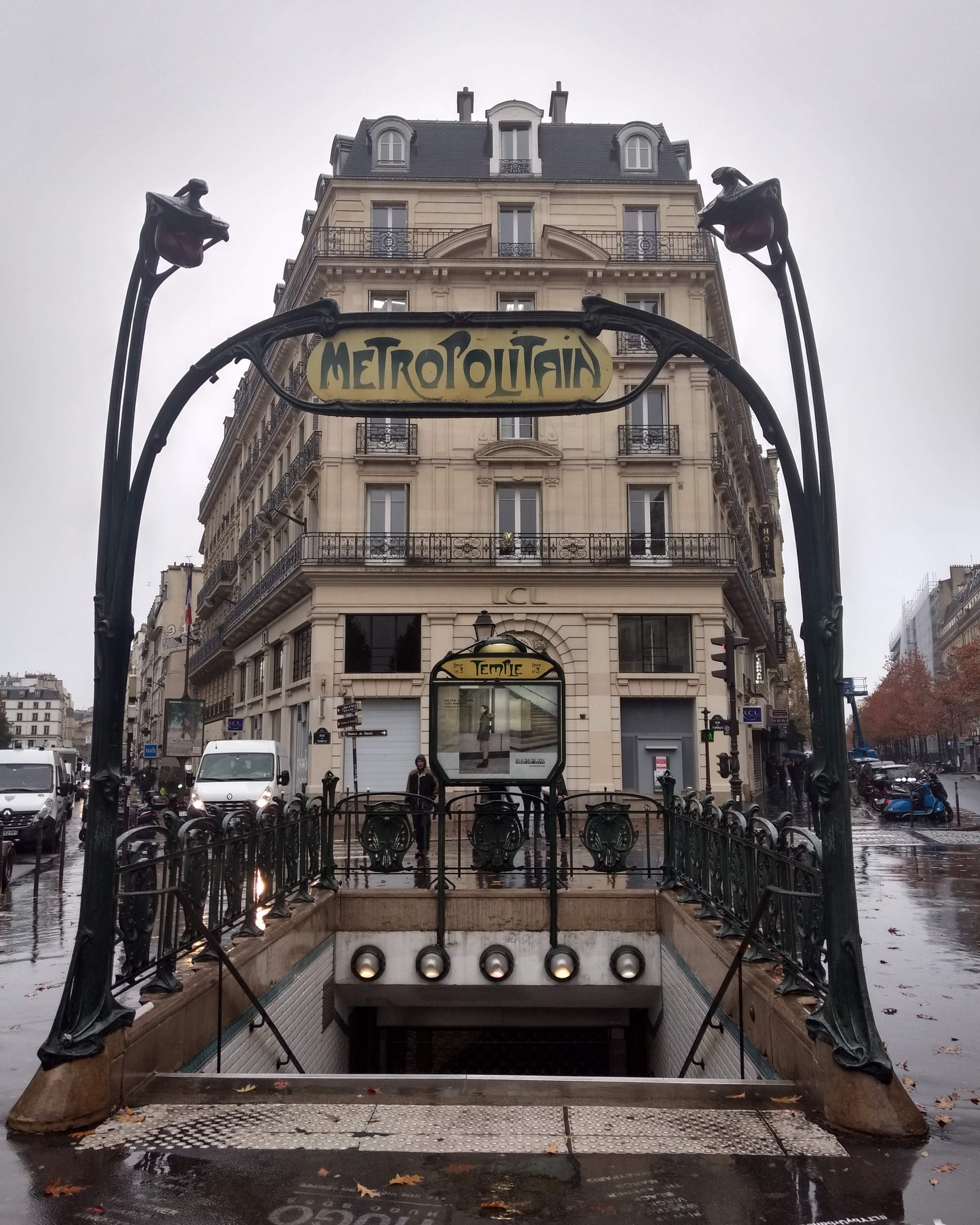 Le Haut Marais, also known as the upper Marais, is located in the northern portion of the 3rd arrondissement.  The area feels more like a neighborhood than the better known, more crowded, and touristy section of the Marais in the 4th arrondissement. Le Haut Marias is filled with historic architecture, museums, restaurants (many of them vegan), cafés, boutiques, and hotels. It makes a lovely home base in Paris. 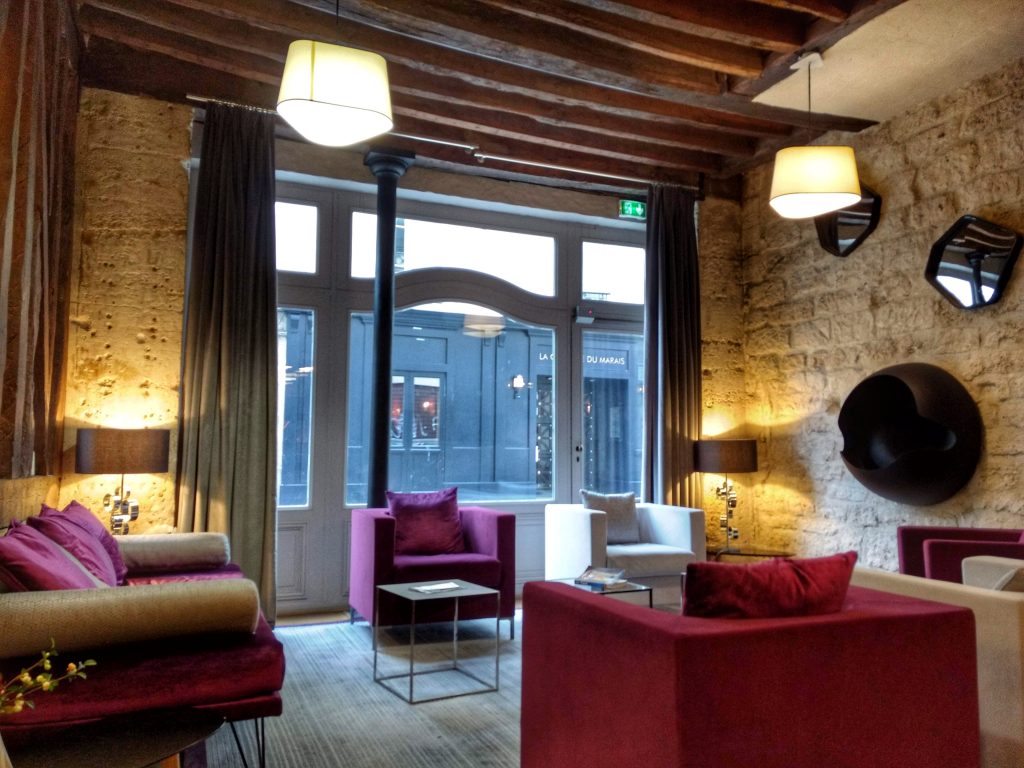 Last November, we enjoyed our stay at the Hotel Jacques de Molay on rue de Archives. Recently renovated, it offers modern design and amenities while staying true to the historic architecture. The staff was kind and helpful, offering us coffee while we waited for check-in, letting us print out concert tickets, and answering any questions. Although our room faced the street, it was very quiet. Braving the cool air, I flung the windows open to watch the clouds float by and the light change as it hit the buildings across the way. 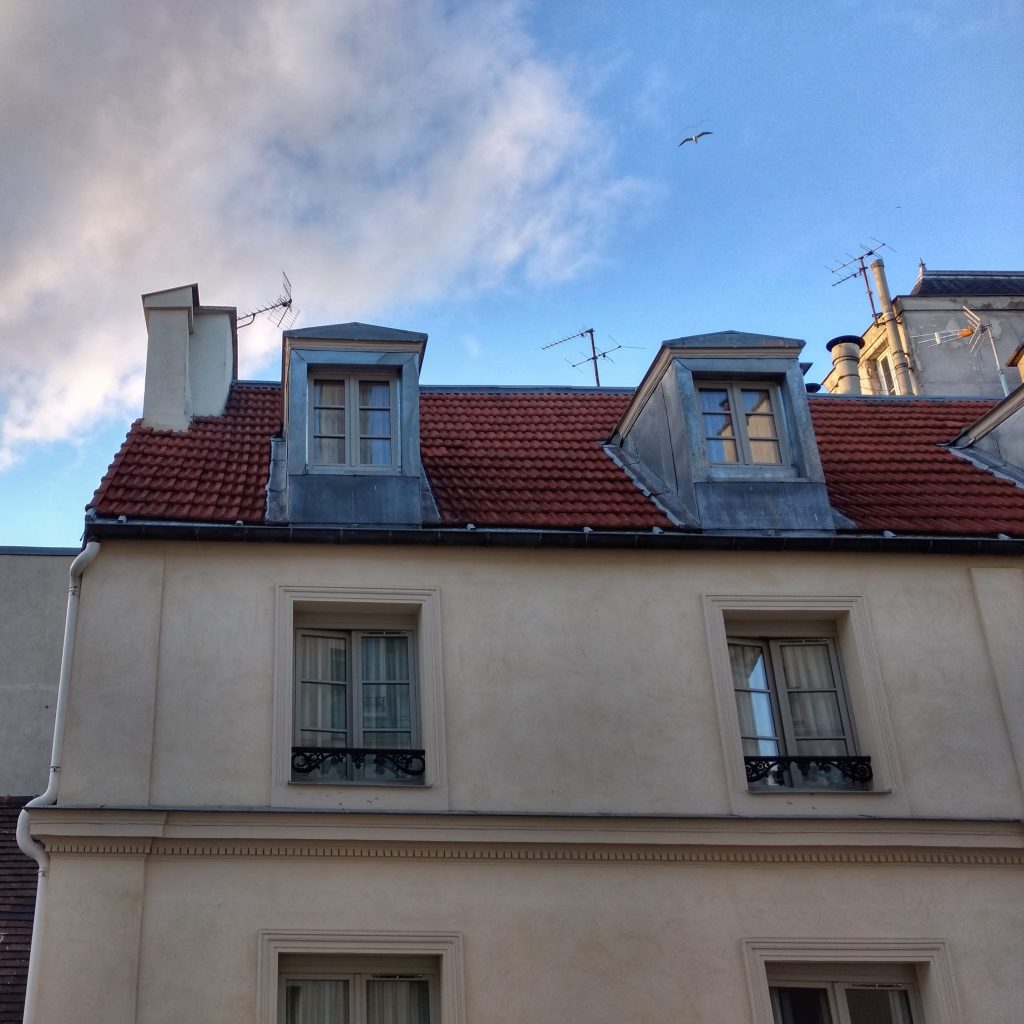 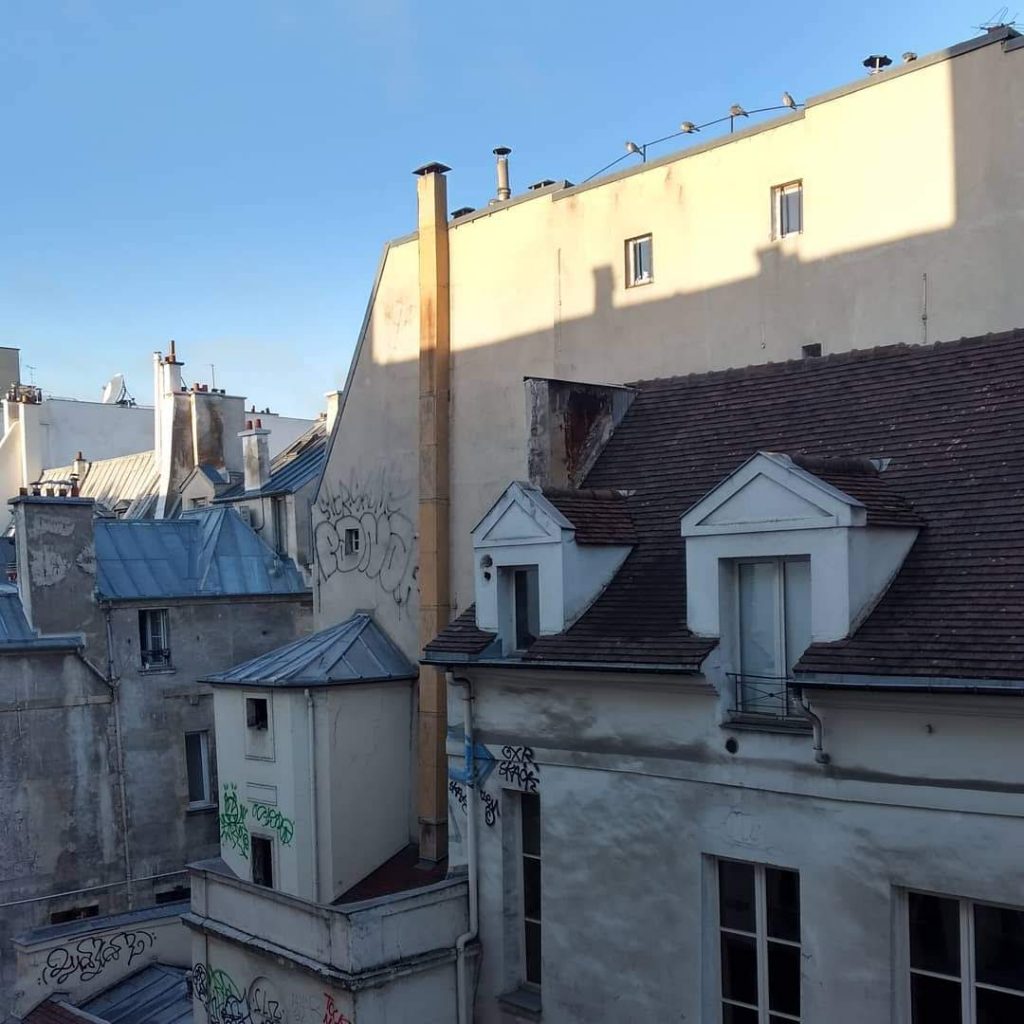 Curious about who the hotel was named after, we learned that Jaques de Molay was the last Knights Templar Grand Master. The area encompassing le Haut Marais was founded in the 12th century by the Knights Templar, who inhabited the area until they were arrested by the king in 1307. Over the ensuing centuries, aristocrats built impressive hôtels particulier and all vestiges of the Templars were torn down. However, we found the spot where de Molay was burned at the stake on March 18, 1314, just under the western tip of Pont Neuf, on the Île de la Cité. One of the great pleasures of slow travel is following the thread of discovery. I also enjoy continuing the journey by researching after returning home. Have you read about the red door at 45 rue des Archives in le Haut Marais yet? 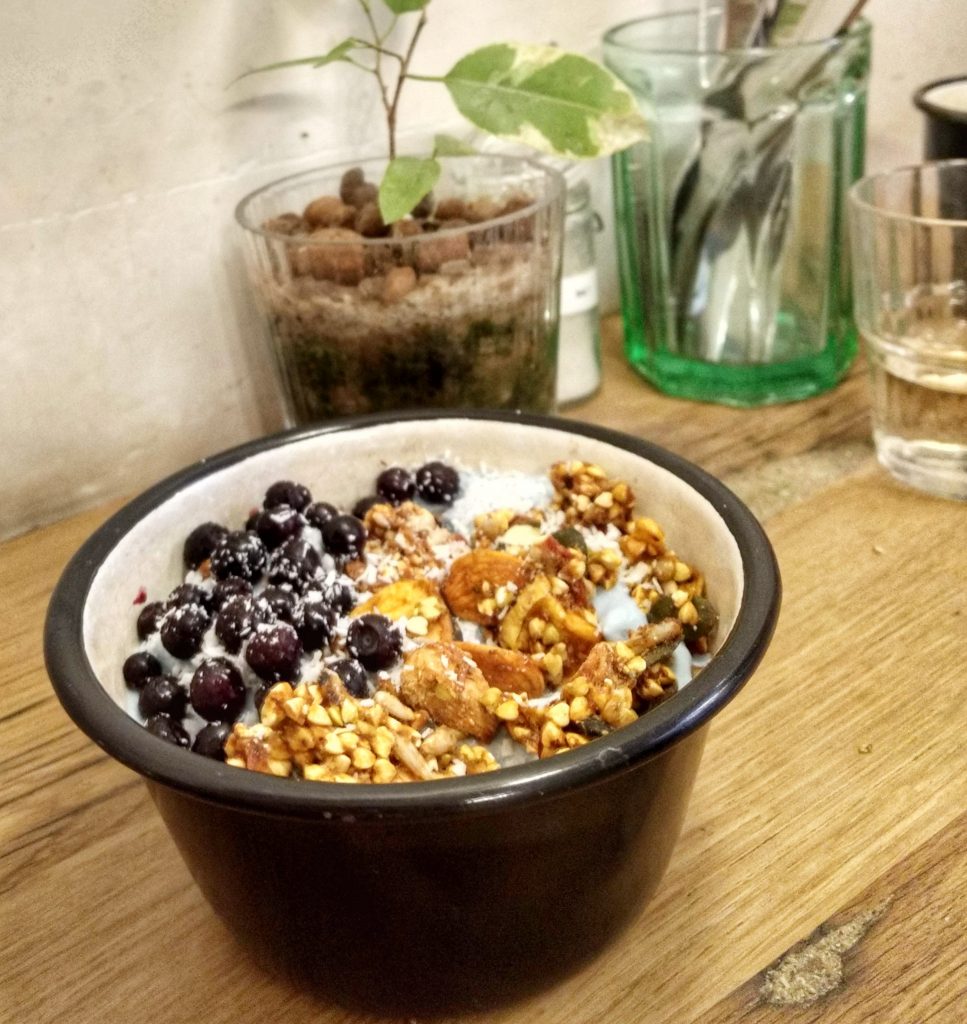 It’s easy to remain healthy and true to our whole foods, plant-based diet in Paris because Le Haut Marais is home to some of our favorite restaurants, one of the main reasons we enjoy staying here. It was easy to start our days around the corner at Wild & The Moon, where we delighted in their focaccia sandwiches and smoothie bowls topped with artisanal granola. In the late evenings, enjoyed relaxing meals in the neighborhood at restaurants such as Le Potager du Marais. Afterward, we lingered at cafés with a glass of wine before turning in. It was lovely to walk around the corner and fall into bed rather than breaking the mood with having to coordinate transportation. You can read more about eating vegan and gluten free in Paris in my previous post.

Additionally, there are several small grocery stores in the area and a mid-sized Monoprix on rue du Temple. We found the biggest, sweetest persimmons at a small shop just down the block from the hotel on rue des Archives, which were fun to eat for dessert back in the room. Persimmons will always remind me of Paris in November. 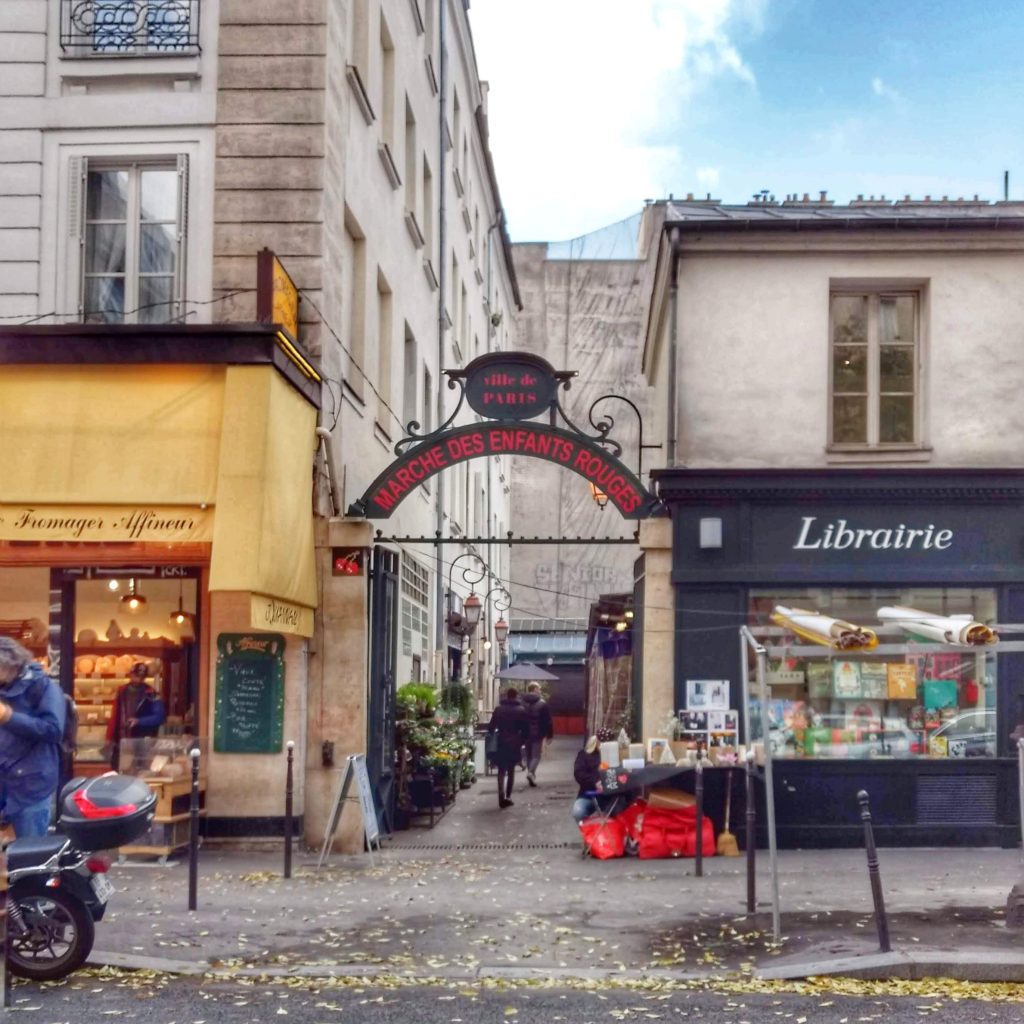 Just around the corner from the hotel, we enjoyed exploring Marché des Enfants Rouges, a charming 400-year-old covered market. The name is derived from a nearby orphanage whose children wore red coats. 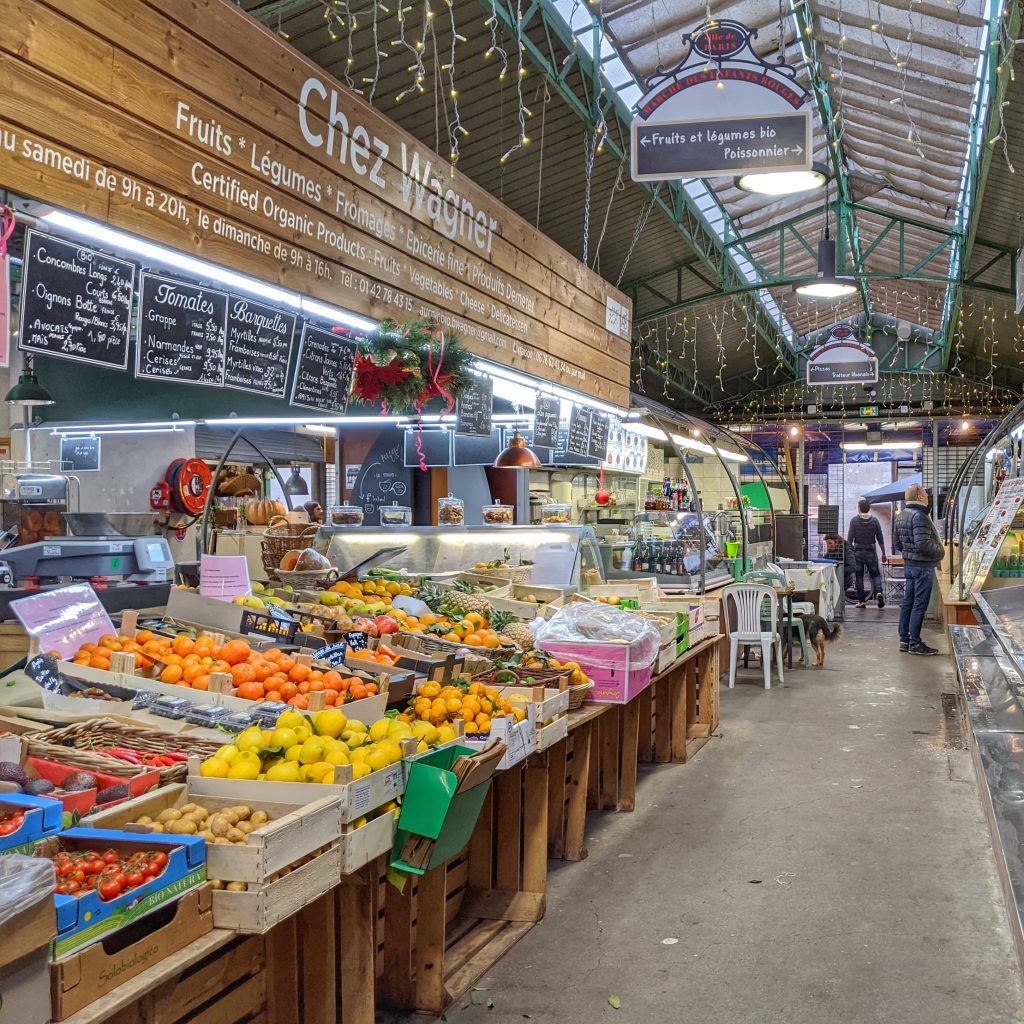 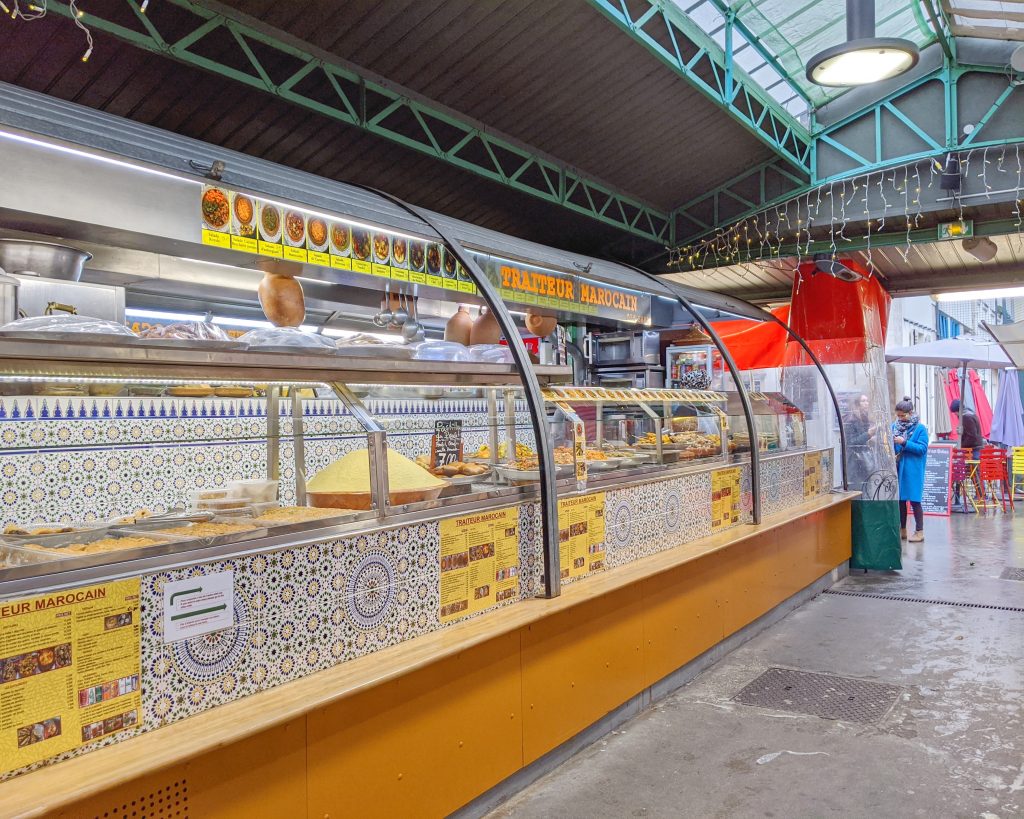 Although I haven’t sampled the wide variety of fruit, vegetables, cheese, and prepared international food available to savor on-site or take away, many articles and blog posts rave about them and you’re sure to find something delectable. The market also has a lovely little flower shop. 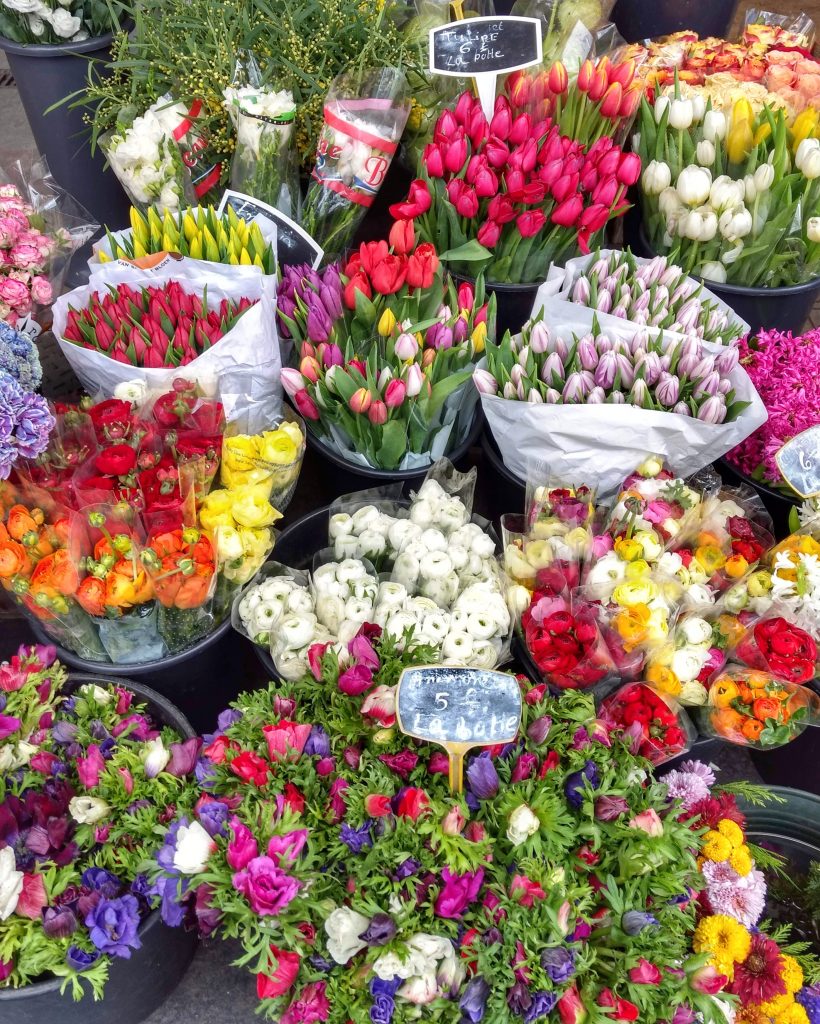 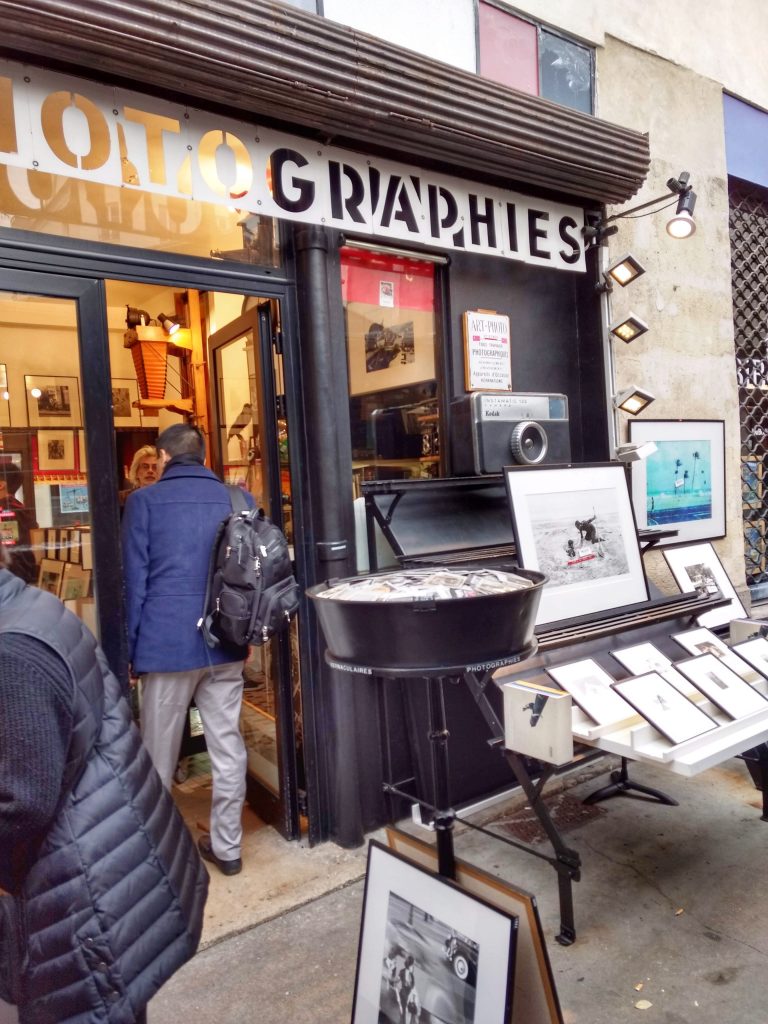 Several years ago, we discovered the tiny, but fascinating Images & Portraits tucked along the west side of Marché des Enfants Rouges. Most of the vintage photographs were vernacular, but some were by well-known artists. We happily spent quite a bit of time rummaging through the bins, pulling out images and sharing them. The owner has a camera pointed at his patrons out front. If you follow owner Fabien Breuvart on Instagram @fabien_collected you might just see a photo of yourself pop up! 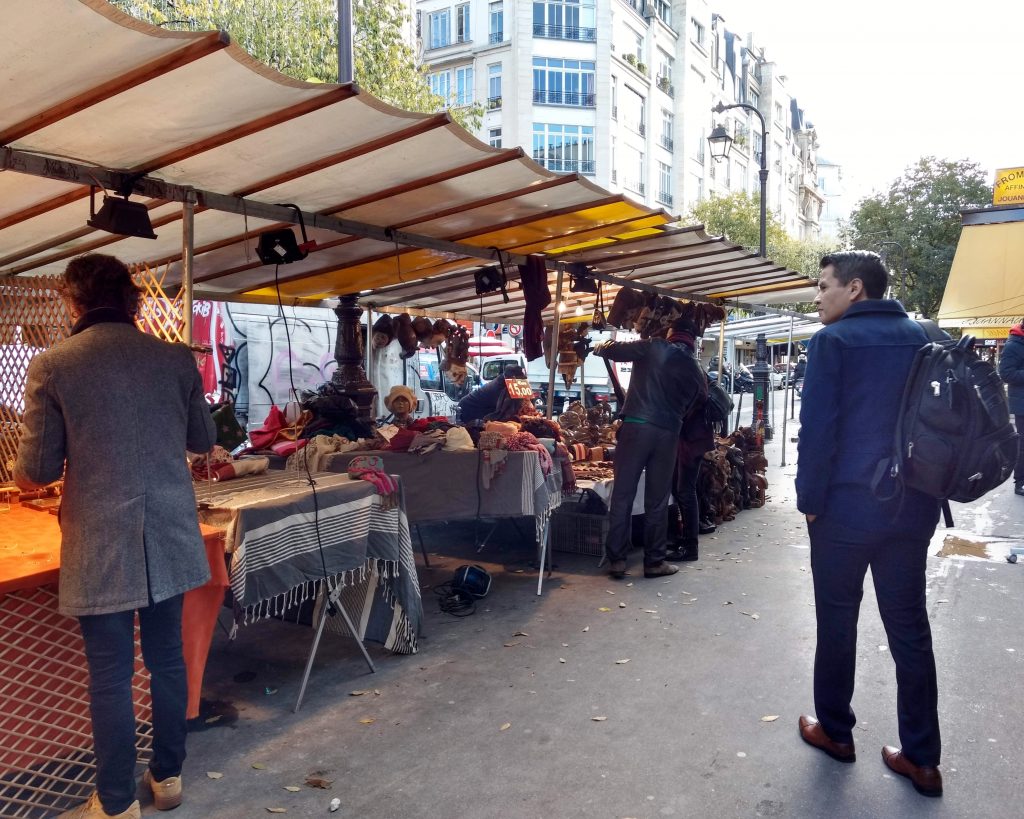 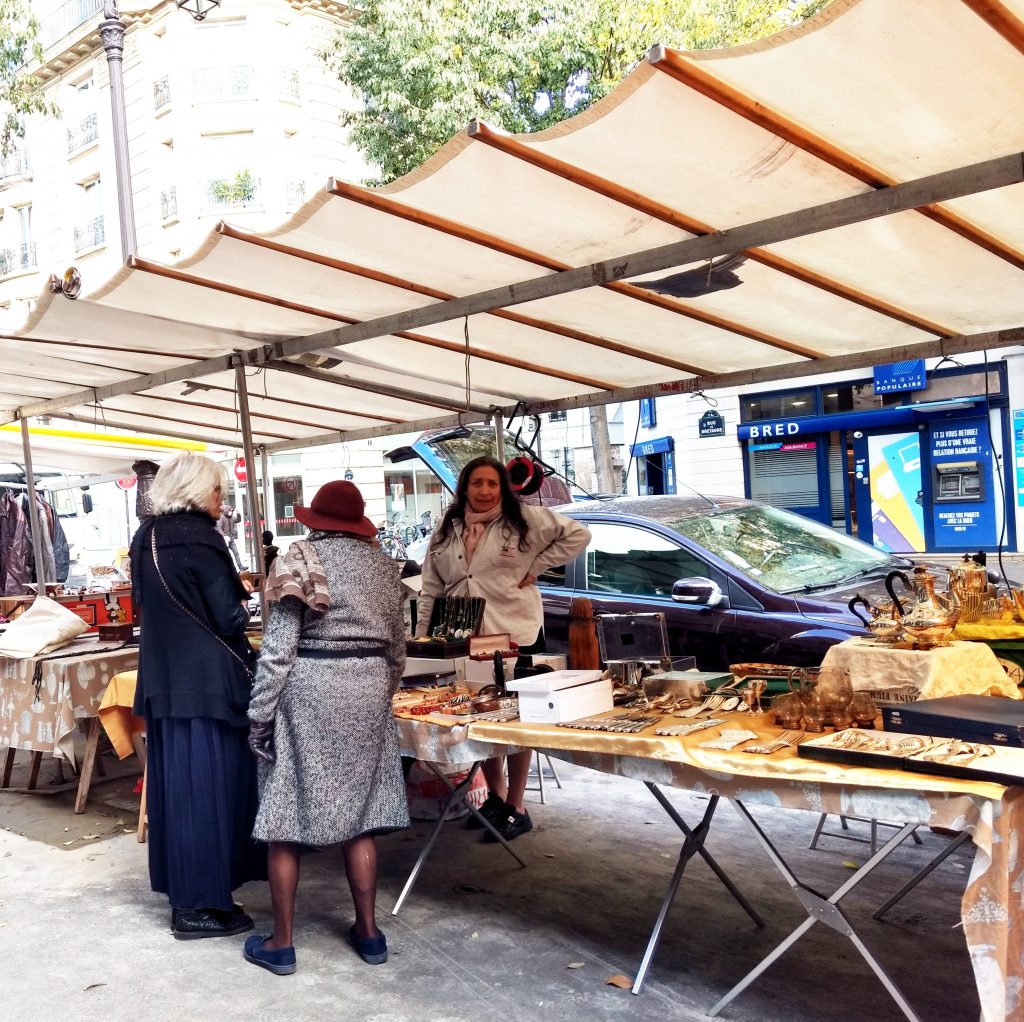 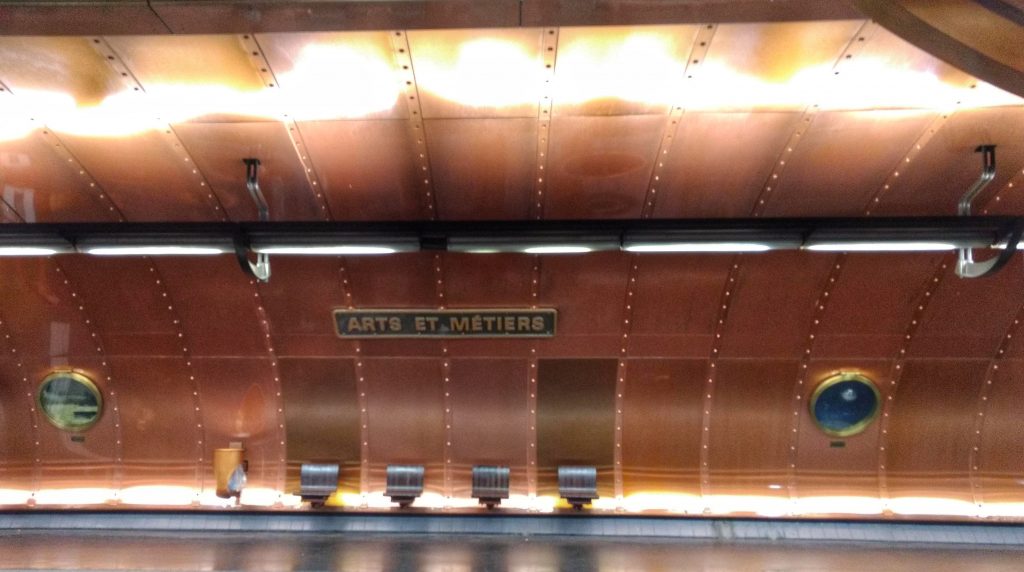 The metro stops in the area include Arts et Métiers, République, and Temple, among others a bit further afield. We love the fantastical submarine-themed Arts et Métiers station, inspired by Jules Verne. Though the metro can be convenient, we love to explore on foot and often meander down to Île de la Cité, the Tuileries, or even over onto the Left Bank. 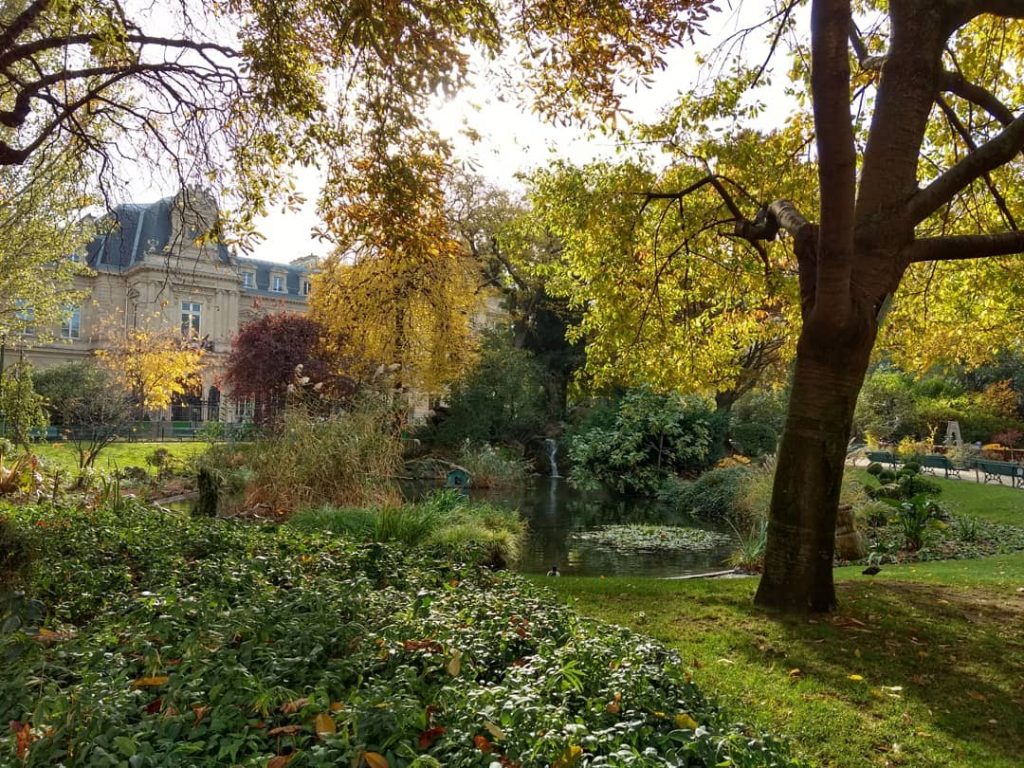 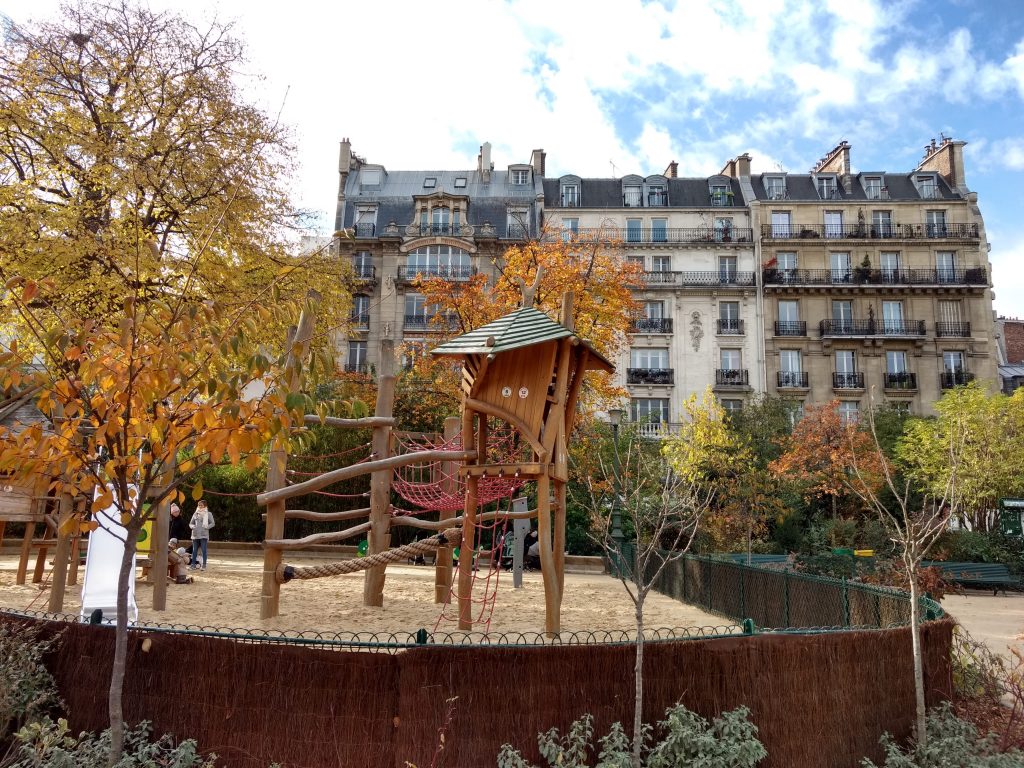 This last trip we finally stopped in Square du Temple, a delightful oasis. It was lovely to be surrounded by greenery with the backdrop of beautiful buildings. We enjoyed watching this slice of life, toddlers bustling around the playground, a few joggers, and elderly ladies and gents cutting through the square with their shopping bags full of produce.

There is so much more yet to discover in le Haut Marais. I enjoy revisiting cities and getting to know them slowly, without the feeling of ticking off a list. I love being able to ditch the map, either because I know where I’m going or to discover new streets and treasures. Next time I want to visit Merci and spend time in their fabulous café surrounded by books, and perhaps visit the Musée du Cognacq-Jay, and wander down streets we haven’t explored yet. Do you have any tips for le Haut Marias?